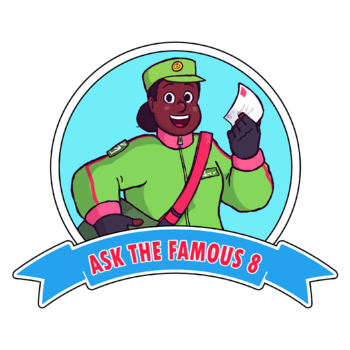 "Please stop sending us letters about The Wiggles."
Ask the Famous 8!note also known as Ask the Famous 8! & Friends! The two titles are interchangeable. is a Thomas & Friends Fan Webcomic by sleepyhenry.
Advertisement:

This comic is told through an Alternate Universe Character Blog run by Percy. It shows some of the shenanigans that the Famous 8 deal with on a regular basis, as well as dive into their backstories.

The Tumblr page can be read here

Ask the Famous 8! provides examples of: