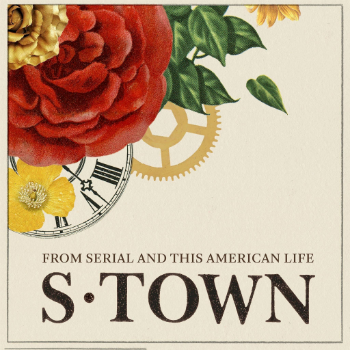 "I'm told fixing an old clock can be maddening: you're constantly wondering whether you spent hours going down a path that will probably take you nowhere, and all you've got are these vague 'witness marks' which might not even mean what you think they mean. So at every moment along the way, you have to decide if you're wasting your time — or not. Anyway... I only learned about all this because years ago, an antique clock restorer contacted me. John B. McLemore. And asked me to help him solve a murder."
—Brian Reed
Advertisement:

S-Town (or "Shit Town") is an investigative journalism podcast hosted by Brian Reed, and created by the producers of Serial and This American Life. The entire story was released at once on March 28, 2017, comprising seven chapters.

In 2014, John B. McLemore contacted Brian Reed, a producer of This American Life, requesting the show investigate the police corruption in his hometown of Woodstock, Alabama (which John calls "Shit Town") as well as a murder committed there by Kabrahm Burt, the son of a powerful family who not only escaped prosecution but repeatedly bragged about his deed afterwards. After months of sporadic emails between John and Reed, they agree to meet in Woodstock to investigate the matter. John quickly reveals himself to be a fascinating figure in his own right: an eccentric yet quite intelligent polymath horologist clearly at odds with his environment. Brian and the listener is then taken on a journey through the curious town and the richness of a man's life hiding just underneath the surface.

Warning: merely classifying the plot of S-Town is enough to spoil a lot of the twists the story takes so expect lots of unmarked spoilers. Proceed at your own risk.