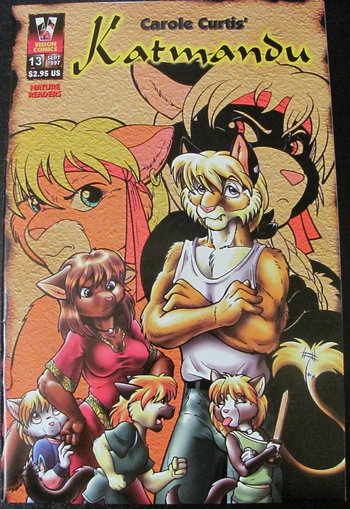 Katmandu is a long-running Furry Comic created by Carole Curtis, with art drawn by many other artists, from 1993 to 2018.note Technically speaking, the comic ended at 2010, but a epilogue episode was published in the Shanda The Panda's last issue.

A Long Time Ago, in a Galaxy Far, Far Away... a war is fought between two feline races, the Velites (based on domestic cats) and Hoplites (based on wild felines, like lions, tigers, etc.) on the planet Katmandu for many years. During a very bloody battle in the middle of the desert, a Velite woman, Leahtrah Middlesmith, and her people were ambushed by a Hoplite squad, led by Thorin Leonius, a Hoplite lion.

The battle is bloody enough to finish with all the Velites and Hoplites dead, with the exception with Leatrah and Thorin. The surviving Velite tries to cut the Hoplite soldier with a knife, but this is not enough to kill Thorin. In a desperate attempt to capture Leahtrah, Thorin chains himself with her, forcing both of them, against their will, to try to go to a neutral zone looking for help.

In the middle of the road, while trying to spend the night in an oasis in the middle of the desert, Leahtrah and Thorin are attacked by a scavenger, who tries to kill them both, but thanks to the combined efforts of both, the scavenger is strangled with the same chain that linked both felines. Next, Thorin cures Leahtrah in a more... intimate way.

After several adventures, in which Thorin is captured by his own people, and where Leahtrah is forced to save him, despite being pregnant, both manage to be together and get married, despite their cultural and racial differences.

From this point on, the story is divided into two: The main story is about Leahtrah and her family in the present time, and the second one talks about her ancestor, Liska, who lived in a society based on the Native American culture two centuries ago, and her corresponding adventures with her family, friends and enemies.

Not to be confused with either the capital of Nepal, or with the villain from Teenage Mutant Ninja Turtles.

Compare (and contrast) with both Extinctioners and The Depths, their spiritual successors. Also compare with its sister title, Shanda The Panda.