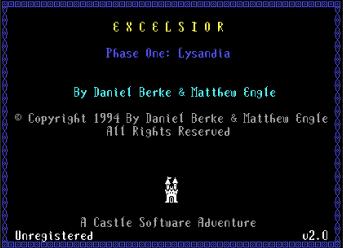 Excelsior Phase One: Lysandia is a shareware, old school computer RPG in the tradition of the early Ultima games. The PC is a "Fixer", part of an interdimensional watch agency whose purpose is keeping the history of various worlds in line with their destinies. In this case, you are assigned to the world of Lysandia, where chaos of an unknown origin is turning them off course. Your job is to discover the origin of this problem and set them back in line.
Advertisement:

It has a sequel, Excelsior Phase Two: Errondor, with much-improved graphics and controls. In it, you are sent to the world of Errondor, tasked with solving a problem that could derail an up-coming peace treaty, and then finding the Fixer who was originally sent to fix it, but has disappeared.

Its official website, where the Windows shareware version may be obtained, is here

. The DOS versions can be found on other websites.