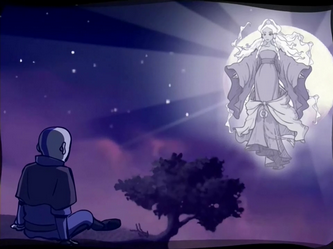 Escape from the Spirit World is a canonical Avatar: The Last Airbender online game. The cutscenes are also available as an "animated book" on the series' home release sets.

Set between Books Two and Three, it follows Aang as he journeys through the Spirit World while his body lays unconscious. He meets Yue, who informs him that he must reconnect with his previous four lives or the Avatar Cycle will end.