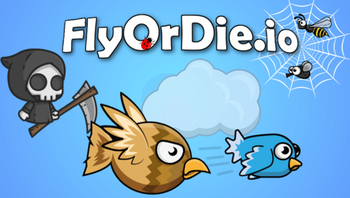 The Grim Reaper on the left is what you can eventually evolve into. The Fly in a cobweb on the right is where you'll have to start off.
Advertisement:

is a 2018 Web Game, which combines Rising Up The Food Chain Game mechanics of Mope.io, complete with the regular evolutions into different species, with the side-view and flight mechanics of Flappy Bird. While hitting the ground or obstacles is thankfully not lethal here, staying on one is nevertheless not recommended, as it'll leave you exposed to other players, who'll sooner or later take advantage of such vulnerable prey...

See Deeeep.io for a similar game, but with a focus on the underwater and near-water ecosystems.