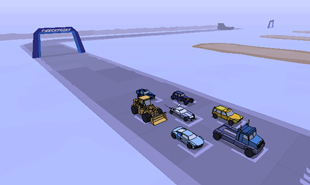 A typical starting line in the game. From 1st to 7th position and left to right: EL KING, Wow Caninaro, Mighty Eight, Radical One, Lead Oxide, M A S H E E N and High Rider.
"WARNING! THE FOLLOWING GAME MAYBE FOLLOWING YOU...
WHAT? NO! OK. THE FOLLOWING GAME IS REALLY MAD BECAUSE UNLIKE OTHER GAMES IT DOES NOT TRY TO OBEY OR EMULATE ANY RULES OF PHYSICS CORRECTLY. IN FACT, IT WAS PROGRAMMED ON THE BASES OF "IF IT LOOKS COOL AND FEELS COOL THEN ITS COOL".
THIS LEADS TO A VERY UNIQUE GAMEPLAY EXPERIENCE UNLIKE ANYTHING BEFORE. THIS GAME IS ALSO A 3D-CARTOON ART GAME; IT'S NOT A NORMAL 3D GAME, SO BE PREPARED!
BECAUSE WHAT YOU ARE ABOUT TO EXPERIENCE IS TRULY SOMETHING CLOSE TO STEPPING OUT OF THIS WORLD AND INTO AN ALTERNATE REALITY ONE.
WHAT YOU ARE ABOUT TO EXPERIENCE IS A GAME CALLED: NEED FOR MADNESS
YOU CAN ALSO DISREGARD ALL THE ABOVE IF YOU WANT! (OR NOT?)"

, bearing the same name as the series and often known as NFM1 to identify it from its sequels, was released in 2005. The player selects a car and stage and then competes with four other AI-controlled cars. The player wins the stage by doing any of the following:

Winning stages unlocks the later stages, and for every two stages won, a new car is unlocked.

Each car has six different properties:

While the speed of the player's chosen car, as well as the damage it does when it hits another car, is partly determined by its statistics as shown on the car selection screen, there is another mechanic that determines how fast and strong the car is. Throughout a race, the player has a Power bar that decreases constantly; a lower bar results in less speed and attacking strength, as well as reduced defense against collisions with or attacks by other cars. In order to recharge the Power bar, the player must do stunts, such as barrel rolls or vertical loops, while airborne. Combined stunts, such as a forward vertical loop combined with a barrel roll while the vehicle spins in mid-air, recharge the Power bar more than doing each stunt separately. If a stunt recharges the Power bar such that it is full, the player's car will maintain full power for approximately three seconds.

The player also has a Damage bar that fills up whenever the player collides with or gets hit by something. If this bar is filled completely, the player's car explodes, is disabled and considered to be wasted. To counter this, there is an electrified hoop that will fully repair any car that goes through it on most tracks.

The AI cars may occasionally choose to waste the player as well, and they play by the same rules as the player.

A downloadable version of NFM1 is available at ArcadeTown.com

(often shortened to NFM2) was released. NFM2 increased the number of cars in a race to seven and featured seventeen new tracks, a number of them being redesigns of stages from NFM1. NFM2 also added some additional cars to play with and unlock and introduced modifications to the game engine that resulted in a car's speed and aerial control ability indirectly determining its Power Save; as a result, the Endurance stat replaced the Power Save stat on the Car Select screen.

A multiplayer version of the series was released as a beta version on September 13, 2011, titled Need For Madness? Multiplayer!

(NFMM). NFMM features all of the cars and tracks from both NFM1 and NFM2, as well as the option to play alone against the AI, or online on a local area network or the official game servers. Unlike previous games, where a track is unlocked only after the preceding track is won or a car is unlocked after every two stages, all cars and tracks are available right at the beginning of NFMM. Additional features that come with NFMM's multiplayer functions include the ability to recolour the player's car of choice, chat with other players and watch a live feed of any race in progress. Free play on the official game servers is limited to five races per IP every nine hours, although this limit can be circumvented on computers without a static IP address and does not affect one's ability to access the servers or observe other races. The five-race limit can be removed via paid registration. The game client can be downloaded from here

was released as a free download. This version lacks multiplayer connectivity, but features all of the cars and tracks from both NFM1 and NFM2 as well as a Car Maker, allowing the player to create new cars from scratch or edit existing cars downloaded from the Internet. Registered players of NFMM can also upload cars they make from the Car Maker into NFMM and share them with other registered players on the servers, as well as download cars shared by other players. Like NFMM, all tracks and vehicles are available from the start in this version. A Stage Maker was added to it on 13 August, 2012, allowing the player to create their own stages or play stages downloaded from the Internet.

Further development of the Need For Madness? series can be found here

, and the Facebook page for this series is located here

. Waly has also announced the series on Steam Greenlight; its description page is located here

The Need For Madness? series provides examples of the following tropes: