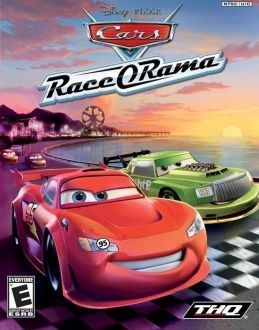 Ka-Chow!
Cars: Race-O-Rama is one of several racing games based on the Cars series, released on everything from Playstation 2 to Xbox 360. The game serves as a sequel to Cars: The Video Game and Cars: Mater-National Championship, sharing the same basic gameplay while introducing a number of unique characters and features.
Advertisement:

After the events of the original movie, Lightning McQueen now teaches a new generation of racers at the Doc Hudson Racing Academy. During a practice race, Lightning and his students are confronted by old rival Chick Hicks, who now runs his own racing academy. Chick and his students challenge Lightning to a series of races across the country, culminating in a grand finale back in Radiator Springs.