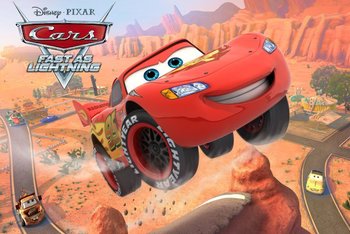 I gotta say, being a Piston Cup race car is pretty great. I've gotten to see the whole world! But on my last trip, I started thinking... Wouldn't it be cool if the world got to see how great Radiator Springs is? And that gave me an idea...
— Lightning McQueen, the game's opening cutscene

Cars: Fast as Lightning is a village/racing simulator created by Gameloft inspired by the Cars series, made available for iOS, Android, and Windows 8.

In this game, Lightning Mc Queen has organized a Track Building/Racing Extravaganza so cars can come from far and wide to build their own racetracks and participate. The game is split into two structures: