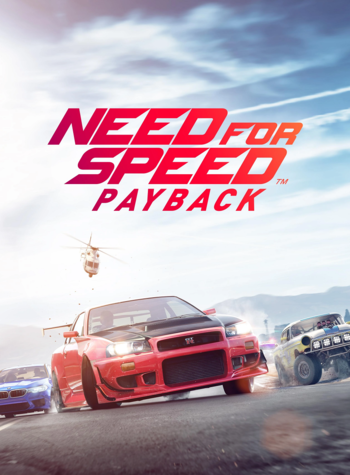 Get ready you mother for the big payback.
Advertisement:

The One With… open-world deserts, three protagonists, and... uh... slot machine-based upgrades.

The twenty-third installment in the Need for Speed franchise, Payback takes cues from the feedback Ghost Games has received from the 2015 reboot. It is a decidedly Darker and Edgier installment compared to its predecessor, and is far more story-driven, in a similar fashion to The Run.

The story starts with Tyler "Ty" Morgan, Sean "Mac" McAlister, Jessica "Jess" Miller, Ravindra "Rav" Chaudhry, and Lina Navarro, all setting up to steal the Koenigsegg Regera of Marcus Weir, a.k.a. The Gambler, from him during a race. However, Lina double-crosses the crew, knocks out Rav and reveals her true allegiance to the House, an all-powerful cartel that controls Fortune Valley and its casinos, criminals, and law enforcement, so much so it can alter a street race's outcome on a whim by bribing other racers with boatloads of cash and fame. Six months after the failed score, Tyler is a valet for Marcus, having allied with him to find the perfect moment to strike against the House. Therefore, he decides to get the crew back together to bring down the cartel, and exact revenge against Lina.

An artist can turn a pile of tropes into a video game: