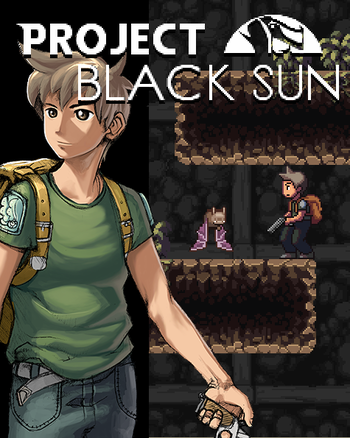 Project Black Sun is an Indie Metroidvania for PC, Mac and Linux, made by Starflower Games

and released on 17th October, 2011.
Advertisement:

You play as an unnamed young man who wakes up from a head trauma in the abandoned mines. He briefly recalls falling through a poorly covered mining shaft while "running and jogging" in the morning. He shrugs and decides "there should be an exit somewhere", so that's what you'll be looking for. Sure, there's some aggressive subterranean wildlife in these mines, but you've got a combat knife, a gun with a 10-round capacity, some paper to map out your progress, and a huge-ass backpack to store all the collectibles you find.

The game is not currently available on Steam, even though it passed Steam Greenlight

back in the day. If you want to buy it, you'll have to do it from one of the several other online stores listed on the developer's website.