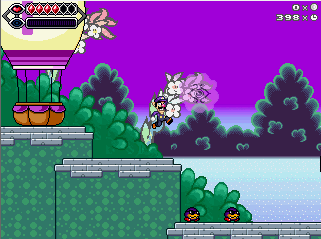 Taking over the world has never been crazier. Starring Waluigi and Psycho Iris.
Advertisement:

Psycho Waluigi is a fangame made by Thunder Dragon of MFGG fame. Set in the Mario Universe, it stars Wario's underappreciated partner, Waluigi.

After taking a nasty fall from his hot air balloon, Waluigi wakes up in an unfamiliar land with a strange, purple, eyeball cloud watching him. The eye identifies itself as Psycho Iris and tells Waluigi that he is in the land of Unconcia. He goes on to explain that due to both the natural influence of the land and his own phenomenal power, Waluigi now has psychic powers. Now that he has his own superpowers, what will he do with them? Save a princess of his own?

Nah, he's gonna go conquer Unconcia for himself, with the help of Psycho Iris. And to do this, he will need to overthrow the various kings and queens, and take out General Hazel and her Hazelnaut Army.

The gameplay is like a cross between Wario Land and Psychonauts, with classic platforming action. Using Psycho Iris, Waluigi can use Psychokinesis to weaponize the environment and his enemies. For example, by lifting up a fireball-spitting Piranha Plant you can force it to shoot out fireballs for you.

A Spiritual Successor titled Psycutlery is in the works