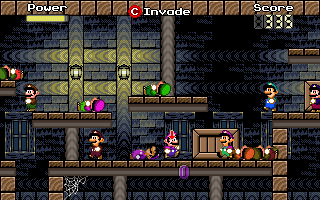 The Purple Coin is a Super Mario Bros. fangame created by Miles/Miles3298 in 2012. You play as an apparently sapient purple coin who has to avoid the legions of inexplicable Mario and Luigi clones (dubbed "bros"). Why? Well, apparently, you're extremely valuable, likely due to being the last of your kind.

However, you have the strange ability to hide and possess the bros when they come near. You can also summon Batbro, a superhero who is definitely not Luigi in a Batman costume. Can you use these powers to successfully evade the bros?

Hey, the tropes invaded that page!: