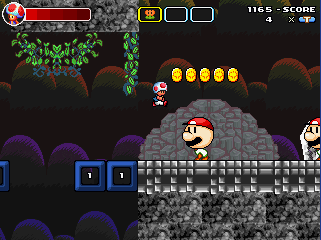 Toad Strikes Back is a highly successful fangame made by Thunder Dragon.

Several hundred years have passed since the legendary Super Mario defeated the evil King Koopa. Since then, the stories of his adventures have long since faded into legend. However, when Kamek, the descendant of the original, and the Koopa Clan attempt to resurrect King Koopa using the Mushroom Kingdom's 7 Starspheres, one ordinary Toad decides to rise up against Kamek and embark on an adventure to get them back in order to prevent the resurrection from coming to pass.