Webcomic / The Wolfman Of Wulvershire 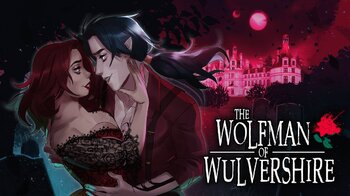 The Wolfman of Wulvershire is a fantasy webcomic available on the Webtoons app, where all but the latest three chapters can be read for free. The series takes place in a Victorian style fantasy world, where technology and medicine are powered by mined Aether, and orcs and elves live alongside humans.

Lady Carina may be of noble birth, but she has no interest in getting married and becoming a baby factory for some man. Despite this, she decides to attend the Duke of Wulvershire's annual Spring Fling, a high society event geared for matchmaking. Things go from awkward to terrifying as a gruesome series of homicides begin taking place at the Duke's mansion. The more superstitious are eager to blame the fabled Wolfman, said to steal away young women in the night and make them his brides, but Carina and the handsome half elf Ren think there may be a darker conspiracy afoot. The Waterfords have dark secrets, and aren't above doing some awful things to keep them hidden.