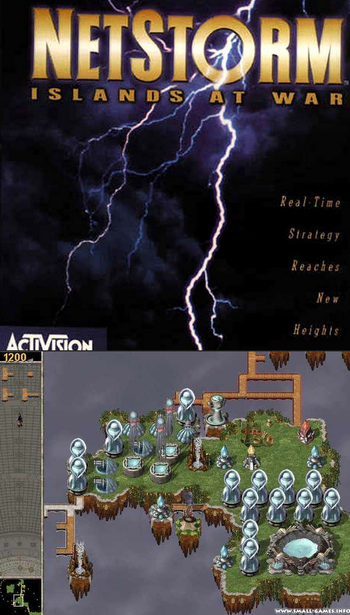 A 1997 Real-Time Strategy blended with a little Tower Defence to create a smoothie of intriguing possibilities and a whole lot of headaches. Combat units are stationary buildings, that you cannot control once built.
Advertisement:

The landscape is scattered islands in the air, which makes up the (unimaginatively named) world of Nimbus. You control (or possibly ARE) a high priest that worships the three furies of Nimbus (Thunder, Rain, Wind) and your battles somehow relate to their unending battle for dominance below the clowds. You build a temple to the furies, they give you a variety of towers to blow up the other guy's towers and temples. The aim of the game is to capture enemy priests and ceremonially toss them off the islands to be eaten by the furies.

Getting from one island to another is done by means of bridges that your temple makes. You get given small sections which you join together to make large bridges. First off, you need to go and gather resources which in Nimbus is Storm Power. This appears from Storm Geysers, most of which are tiny little islands spread around the map. You bridge to them and send your mooks off to collect the crystals. Secondly, you need bridges to get to the other guy's island and blow his stuff up. You can place units on your island but mostly that will put you out of range of the other guy, and the only other place you can build units is attached to your own bridges, that in turn connect to your island. Bridges are very hard to destroy, and placing them correctly is one of the major skills of the game. Particularly, placing bridges very quickly and in such a way as to prevent an enemy from placing his own bridges and units is pretty challenging, and doing it fast and so you can still attack from them is an art form.

This brings us neatly on to the units themselves. Each of the furies has its own tech tree, and there is a general purpose one (Sun) that any side can use to fill in the gaps in its own tree. Each tree you want to build units from needs a specific workshop built, which costs a fair amount. For any given battle, players normally stick to at most one tech tree plus the sun tech tree. Each tech tree has its own strengths and weaknesses, but in principle contains: A cannon-type unit (that shoots stuff), a blocker (blocks shooty things), barrier generators, an anti-air defense tower, an air-attack unit (you build a base unit that continually builds little attackers) and ground and/or air transports for capturing storm power. In no particular order, the tech trees are:

Thunder - Lots of damage, but not too flexible.

Sun - Nothing excels, but cheap and patches up the other trees.

So yeah, you build between islands, you shoot units with your units, you blow the other guy's temple up, knock their priest out, capture him and tear out his soul.

Although utterly unrelated to game play, this is a game with a LOT of flavor, and for a world that you never really get to know, it takes quite a lot of pains to get you interested. EVERYTHING has an encyclopedia entry, and there is a whole lot of quotes and really good flavourful writing. It's actually kind of sad that no other games in this universe were made. We also get a glimpse of the normal people living in this horrible, war-torn world, living in sunken houses and clinging to the edges of the islands. It's pretty cool.

For some years now, Netstorm has been freeware and maintained by the people at NetstormHQ

. Additionally, a Spiritual Successor titled Disciples of the Storm is currently searching for funding on Kickstarter here

. Jim Greer, one of the creators of the game and founder of Web Game site Kongregate, is taking part on the project.