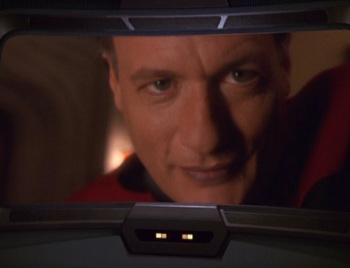 Swell.
"Will you send him to prison for eternity or will you assist in his suicide plan? That's a toughie, but that's why they made you captain, isn't it?"
Advertisement:

Voyager encounters a member of the Q Continuum who was trapped within a comet because of his desire of wanting to kill himself. The Q that was encountered by Captain Jean-Luc Picard appears on the scene to argue against the case of his fellow Q's desire for being granted mortality for the sake of self-termination, and although Captain Janeway doesn't want to see that Q end his own life, she nonetheless rules in favor of his being granted mortality when she sees for herself the kind of life he and other members of the Q Continuum are constantly subjected to due to their immortality.