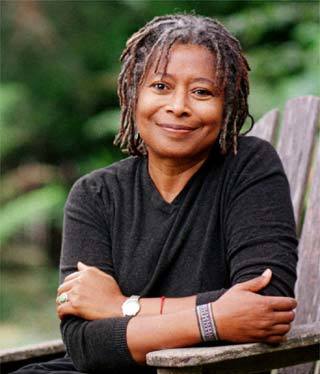 Alice Malsenior Tallulah-Kate Walker (born February 9, 1944) is an American author, poet, and activist. She is best known for writing The Color Purple, a highly influential novel and winner of the Pulitzer Prize in 1983.

Born in Eatonton, Georgia to sharecroppers, Walker was the youngest of eight children. When she was eight years old, she was permanently blinded in her right eye due to a BB gun injury. Since she could not do chores, her mother gave her a typewriter and from that point, Walker's interest in reading and writing grew. She was valedictorian at her high school, and attended Spelman College for two years before transferring to Sarah Lawrence College on scholarship. It was there that she had her first work published, a poem collection titled Once.

After college, Walker became involved in the Civil Rights Movement, working for the NAACP and teaching while still writing. She had her first novel published, The Third Life of Grange Copeland as well as more poem collections. In 1982, Walker published The Color Purple, what would become her famous and well-regarded novel, a novel about the coming of age and life of a black woman in rural Georgia. The book won the Pulitzer Prize in 1983, and would later be adapted into a film and musical.

Walker continues to write to this day, and known as one of the great contemporary American writers, as well as being an activist and feminist; she coined the term "womanist," a term to describe a black feminist or a feminist of color.