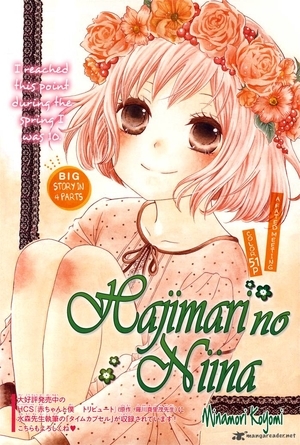 Niina Aoyagi is a 10-year-old girl with a crush on her handsome neighbour Atsurou Itami, who works as a nutritionist at her school. This wouldn't be nothing more than a sweet Precocious Crush... if it wasn't for Niina being the reincarnation of Chitose Amamiya, a 16-year-old girl who died 10 years ago and Atsurou's best friend, whom she had a crush in. Niina will have to deal with both Chitose's lingering wishes and her own feelings.

A sweet shoujo manga by Koyomi Miyamori, Hajimari no Niina (lit. Start of Niina) was originally planned as a collection of four related one-shots serialized in the magazine Hana to Yume, but eventually was expanded to more chapters, running from 2010 to 2012 and compiled into 4 volumes.