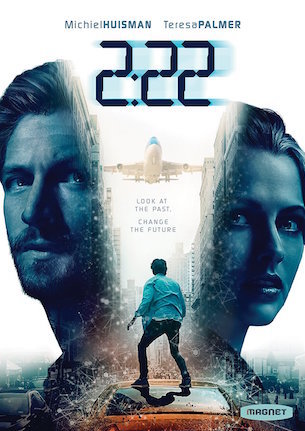 A chance encounter, a fateful connection.
"2:22" is a 2017 Sci-Fi Thriller, starring Michiel Huisman and Teresa Palmer. Directed by Paul Currie, and written by Nathan Parker, it was originally released in select theaters and VOD on June 30th, 2017.
Advertisement:

A hotshot air-traffic controller at JFK in New York, Dylan Branson (Huisman), experiences an inexplicable vision of the past while on the job, the effects of which nearly lead to the collision of two planes on his watch. After being removed from work pending an investigation, he begins to notice an ominous pattern of events repeating themselves in exactly the same manner every day, ending at precisely 2:22 p.m.

Meanwhile, Sarah (Palmer), a passenger on one of the two planes that nearly collided, is dealing with her own troubles.After having a chance encounter with Dylan, they immediately feel, despite being total strangers, as if they have known each other for years, and were born on the same day.