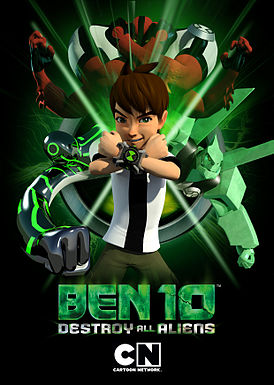 Ben 10: Destroy All Aliens is a 2012 CGI film in the Ben 10 franchise. It is the third for the original series (coming after the live action film Ben 10: Race Against Time and the regularly animated Secret of the Omnitrix) and the fourth film in the series overall.

The film takes place at the end of the original series where Ben is now back in Bellwood getting on with his life (as usual not particularly happy about it). During a fight with a tank, Ben is caught in the crossfire from Gwen's magic which affects the Omnitrix and causes it to go haywire more then usual. Tetrax comes to pick up Ben so Azmuth can fix it but en route they're attacked by a Galvanic Mechamorph hunter who's also looking for Azmuth. The malfunction from the Omnitrix cause Ben to teleport wildly around the world with the Mechamorph in pursuit, while Tetrax, Max and Gwen try to locate Ben themselves.