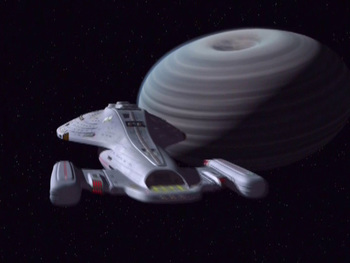 What a funny looking planet.
The crew comes in contact with a planet rotating 58 times a minute, and where time flows correspondingly faster. The spaceship, in orbit, act as a third pole and any attempts to leave cause massive quakes below, so the inhabitants think they are a deity causing it.
Advertisement:

As time goes on, the civilization that develops on the planet is greatly influenced by the presence of the "Sky Ship". The inhabitants advance to the point they can travel at sublight speed to the Voyager, where the two astronauts — Gotana-Retz and Terrina — both try adjust to the new time frame, but only the former survives. He finds out that time moves much more slowly on the ship, and when the ship comes under attack by the suddenly-more-advanced civilization, he acts as an ambassador until he is returned to the planet, where 50 or more of his years have passed.