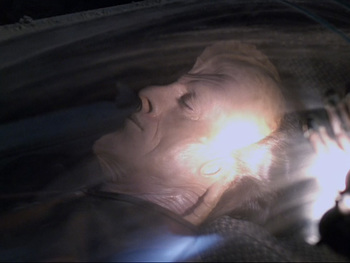 Wakey wakey!
"I wanted to help revive a civilization, not start a war."
Advertisement:

When a Shining City is under attack, a Vaadwuar scientist named Gedrin is forced to terminate 37 of his colleagues' stasis pods' life support, then seal himself and his wife Jisa in themselves, for five years...

Voyager is pulled through a rusty brown subspace corridor filled with debris, some ancient, when they encounter a working ship! The inhabitants, the Turei, claim that the 'underspace' belongs to them, and helpfully push Voyager out of the corridor... and follow them out! The Turei decide Voyager knows too much and demand to come aboard so they can purge her computers of any information regarding the underspace; failing that, they open fire. Voyager needs to escape, so they locate a highly irradiated planet nearby that they can lose their pursuers near. They do so, and find a decimated city similar to the one that was bombed in the teaser.

When investigating some stasis pods underground, Seven Of Nine wakes up Gedrin, who is a bit shaken up to discover that the estimate of five years was a little off...