The Charmed Ones' powers are put in jeopardy after they're tricked into taking part in a demonic reality show where demons compete to hunt down the sisters. The winner gets the witch's powers. 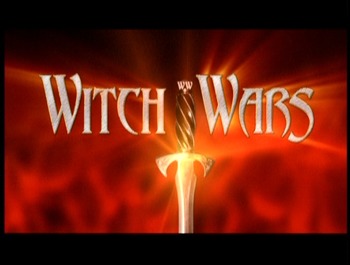 The episode opens in medias res with a teaser to a TV show called "Witch Wars", in which a demon promises a fight with the Charmed Ones.

Immediately after, the scene flashes back to 12 hours earlier. The Charmed Ones are meeting at Magic School. They are trying to identify who is trying to turn Wyatt evil. Leo is after a witch killer, according to Gideon. Phoebe is quoting statistics and suggests that someone close to them might be after Wyatt. Gideon tries to encourage the sisters to go after the witch killer. Chris admits that what happens to Wyatt happens before he's born.

Gideon meets with Sigmund and notes that the sisters are "just about to figure us out".

Phoebe goes to a crime reporter at the newspaper, Kyle Donie. She says she wants to dedicate a month of her column to protection of children and wants to know how she might find someone who is after Wyatt. Paige orbs in, worried that Phoebe has no powers, and hands her some potions.

Gideon appears to the gamemasters, claiming to have an offer. He tells the gamemasters that the Charmed Ones are after him, but he needs them distracted. He plans to plant a witch in their care and the demons on Witch Wars will have to come after her. With the pregnant Piper taking refuge at Magic School, the Power of Three won't be a factor. Gideon demands that no innocents be harmed, but the gamemasters have other ideas after he's gone.

Gideon orbs into the manor and tells Leo that Piper has become paranoid and is terrorizing Magic School. Leo orbs away. Paige scries for witches under attack; Gideon fakes a finding and tells her and Chris to hurry after her. Alone in the manor, Gideon plants a number of small Ronyx crystals in the walls, cameras for Witch Wars.

Chris and Paige find a witch being attacked by three demons. One steals an amulet from her and shimmers away. Chris and Paige orb the witch, Tali, back to the manor. The amulet is an heirloom and has no powers, but Tali is now where Gideon wants her.

A crowd of demons is watching Witch Wars in a bar.

Piper argues with a teacher at Magic School about an incident in the preschool. Leo manages to calm her down, noting all the people around Wyatt who love and protect him.

A round of Witch Wars begins, with a Darklighter, the "Brute demon" who stole Tali's amulet, and a shapeshifter (also involved in the attack on Tali) setting out to go after Tali, but they'll have to get past Paige and Phoebe to get to her. Each carries a power-absorbing athame.

Phoebe is talking with Kyle after hours, trying to find out who's after Wyatt (but without revealing too much information), when Kyle gets up for some coffee. The shapeshifter knocks him out and morphs to his appearance, taking his place.

Paige scries for Tali's amulet and she and Leo orb to its location. The brute demon lays it on the ground and tries an ambush, but Paige suspects a trap. Paige throws a potion and vanquishes the demon, and then the two see a crystal projecting an image — showing the interior of the manor. The Darklighter orbs in, shoots Chris, and kills Tali. Leo orbs back to the manor and Paige grabs the crystal and the Brute demon's athame.

Leo heals Chris and Chris tells of Underworld rumors of a demonic game show. Paige calls Phoebe and "Kyle" tries to accompany her to the manor, but she becomes suspicious. "Kyle" tries to force Phoebe to take him with her, but the Darklighter orbs in and takes out his competition. Phoebe calls for Leo and Chris; Chris arrives and they orb away.

The Darklighter tries to claim his prize, but the male gamemaster vanquishes him with his athame. The gamemasters plan to go after the Charmed Ones themselves.

Gideon magically forges a page that describes the projector crystal and presents it to the sisters. Phoebe speaks an incantation from the page; Gideon secretly gestures in that moment, and the crystal activates, showing the teaser from the beginning of the episode. Gideon claims that it's the gamemasters of Witch Wars that are after Wyatt.

Chris and Paige enter the manor. The gamemasters shimmer in and attack. Leo and Phoebe orb in. Paige throws two potions but they have no effect. Leo vanquishes one of the gamemasters with the Brute demon's athame. Phoebe takes the athame and it gives her its demonic powers. She shimmers, throws an energy ball and vanquishes the other gamemaster.

Phoebe shimmers to the demon bar. She throws energy balls, vanquishing several demons and causing the rest to flee in panic. Back at the manor, Paige has to stab Phoebe with the athame to remove the demonic powers from her.

Sigmund is worried that he and Gideon might themselves end up turning Wyatt evil by their attempt on his life. Sigmund plans to go to the sisters, but Gideon kills him to protect his secret.