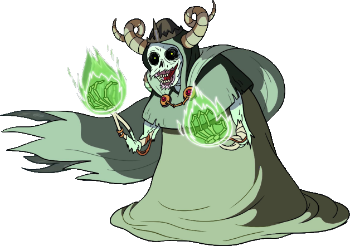 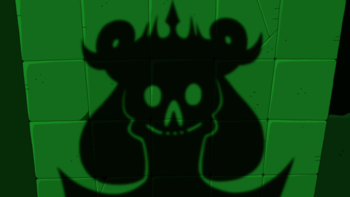 Voiced by: Ron Perlman, and Kevin Michael Richardson when possessing Princess Bubblegum.
"You are alone, child. There is only darkness for you, and only death for your people. These ancients are just the beginning. I will command a great and terrible army, and we will sail to a billion worlds. We will sail until every light has been extinguished. You are strong, child, but I am beyond strength. I am the end, and I have come for you, Finn."

An undead sorcerer who is supposedly Ooo's greatest evil. He has an army of the living dead and vast magical powers. He was defeated and sealed away in amber inside of a great tree by the legendary hero Billy. Not a funny character at all. Originally called the Lich King, renamed to avoid confusion with that other guy.

In season 5, it was revealed that he's connected to the nuclear radiation released from a bomb used in the Mushroom War. Season 6 goes further by implying he was born from an incarnation of the Catalyst Comet that wiped out the dinosaurs millions of years ago. The final episodes strongly hint that both the green Catalyst Comet and the bombs used in the Mushroom War were made of GOLB's breath.

In "Finn the Human" an Alternate Timeline is created where the bomb wasn't detonated in an attempt to keep the Lich from existing. Unfortunately a series of events in "Jake the Dog" leads to the bomb detonating 600 years later in the present day, creating a new Lich from Jake.