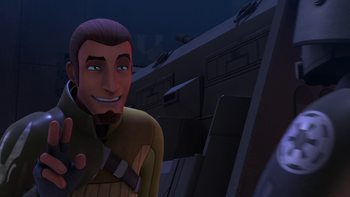 Empire Day, I love it!
Advertisement:
open/close all folders
Promo Shorts
"The Machine in the Ghost"IArt Attack

Season 2
The Siege of Lothal

The Siege of Lothal Part 2

The Mystery of Chopper Base

The Holocrons of Fate

Wolves and A Door