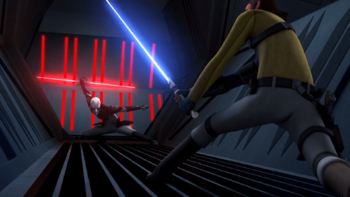 Kanan: Do or do not; there is no try.
Ezra: What does that even mean? How can I do something if I don't try to do it?!
Kanan: I– Actually, that one always confused me too, but Master Yoda sure used to say it a lot.
[later]
Kanan: Ezra. I'm not gonna try to teach you anymore. If all I do is try, that means I don't truly believe I can succeed. So from now on, I will teach you. Look, I may fail. You may fail. But there is no try.
Advertisement:

Ezra starts his Jedi training in earnest, though Kanan worries he is not a good enough teacher for Ezra since he was only a Padawan when Order 66 was given. As luck would have it, the rebels learn that Jedi Master Luminara Unduli survived the destruction of the Jedi Order and is currently being held by the Empire in the Spire on Stygeon Prime. Embarking on a rescue mission, the rebels soon end up crossing paths with the Inquisitor.