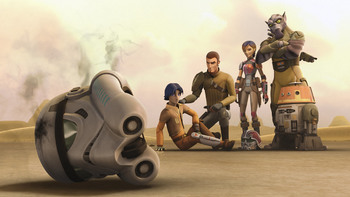 The Ghost crew tries to thwart an Imperial plan to capture exiled Senator Gall Trayvis, who's secretly come to Lothal to meet them. However, there is more going on than meets the eye: namely, that the "good" Senator's true allegiance is not to the Rebellion but to the Imperial Security Bureau.