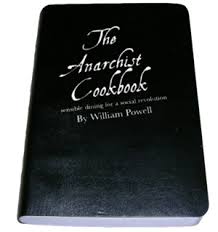 The Anarchist Cookbook is a 1971 book by William Powell. It was written to protest The Vietnam War that contained various instructions for things like phone phreaking and, most controversially, building homemade explosives. However, it's really infamous for two things:
Advertisement:

With the rise of the internet, a number of text and .pdf files have showed up bearing the name of this book. If you do a Google search for "anarchist cookbook," some of these will probably come up on the first page. They often contain some information cribbed from the real book, as well as various tips, tricks, and pranks that have been put in over the course of twenty years (these things date back to the dark days of Usenet). As one would expect from something that was put together by the precursors to 4chan, most of the stuff in these online "cookbooks" is often so outdated or dangerously inaccurate that it makes the real Anarchist Cookbook look like an Army field manual.