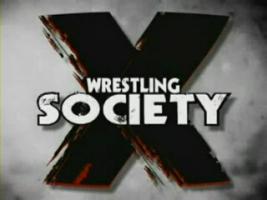 Step Inside the Bunker...
Short-lived Professional Wrestling promotion aired on MTV in 2007.
Advertisement:

Presented as an "underground" fight-club, taking place in the WSX Bunker, the focus tended to be on high-flying in-ring action, boosted by a ton of pyrotechnics and MTV production style. While criticized for its obvious use of planted audience members, the thirty-minute episode length, some questionable musical guests, and announcers that oozed Totally Radical faux-edginess, generally the matches themselves were of high-quality, the wrestlers had some interesting (and often hilarious) gimmicks, and the explosions were pretty cool. During its run, additional matches, promos and commentary was shown online at the show's website.

All in all, it had the marks of a promotion that had just started to find its voice when it was Screwed by the Network. Originally, the cancellation was blamed on a spot where Ricky Banderas set Vampiro on fire with a flash paper fireball, which, due to a mishap, was larger than it was originally meant to be. In 2016, Kevin Kleinrock refuted the story in an interview

, blaming MTV, their scheduling (Kleinrock had begged them not to put WSX up against WWE's revival of ECW, which they did anyway), and falling ratings for the entire male-centric block WSX belonged to (which was cancelled en masse) instead. The rest of the episodes were quickly burned off in a single night, with the final episode unseen until the DVD release.