Radio / This Is That 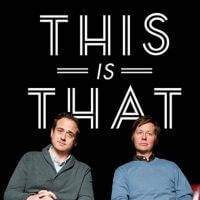 "Canada. North America's third-largest nation. Home of Toronto. Member of the Internet. Skies, and lakes, and skies. Let's peer into the heart of this great nation: Who it is, where it is and where it's going, and how it's getting there, and who's involved, and what's at stake. This. Is. That."
— Opener for This Is That
Advertisement:

At first glance, This Is That seems to be a basic CBC Radio news interview show; kind of interesting, but mostly inoffensive, maybe a little bland. Most listeners realize that it's really a comedy show that's managed to pull off a perfect style parody, probably around the time the commentators start talking about lowering the drinking age in Quebec to 14

— 12 if you're with an adult. Many don't. They call in to comment or complain, which the show uses as part of the comedy.