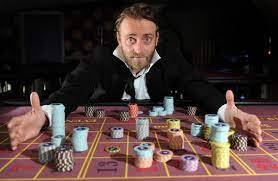 Tim Fitzhigham: The Gambler is a non-fiction comedy series broadcast on BBC Radio 4 in which Tim Fitzhigham locates unusual wagers in the old letters, newspapers and the records of gentlemen's clubs, and attempts to re-create them. For example, the pilot episode revolved around a bet that a letter could be sent 50 miles in one hour, using only what was available to the original gambler in the 18th century.

I bet these tropes are present: