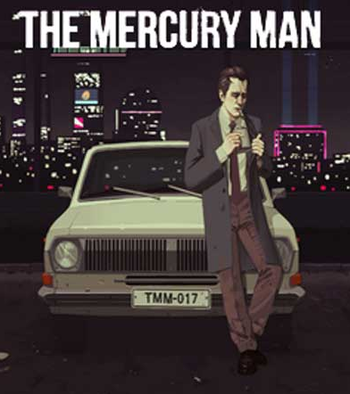 The Mercury Man is a 2D Action-Adventure game with a top-down perspective and RPG Elements, developed by Mehsoft (the publishing outfit of a Russian Let's Player Maddison), and released for PC through Steam on May 20th, 2018. It is best described as a tongue-in-cheek spin on Blade Runner, with a focus on Black Comedy.

The story is set in the 24th century, after a major biomedical breakthrough occurred in 2310: all of the once-terminal diseases suddenly became curable through a treatment that replaced their blood with mercury, with the people who have undergone it known as "mercury men". However, it soon became clear that while that treatment may have saved those people's lives, it turned them into a walking hazard for everybody else. Thus, the world government had resorted to not only banning the mercury transfusions, but had also set up police squads devoted to exterminating the mercury men.

Global riots were sparked once it became known that the politicians and the global rich directing such extermination in public nevertheless couldn't resist extending their lifespans in this manner in private. This eventually led to the government overthrow by the hunters and their establishment of a police state, which compromised by rounding up everyone who had undergone the mercury treatment and deporting them to Mars. Martian colonies were also split into the inner zone for the former elite, and the outer zone populated by the poor people who could only afford the transfusions from underground clinics. Since these were often botched, and the outer zone was poorly terraformed with toxic air, the people sent there began to devolve into mutants.

The protagonist, Matvei Vetrov (translated as Matthew Vetrov in the English version) is one of the hunters, and he believes that he has it made, and only needs to follow orders without worrying about any of the quandaries above. However, his world quickly gets turned upside down....