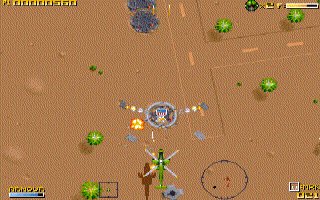 Seek And Destroy is a Vertical Shoot 'em Up developed by Vision Software and published by Safari Software (A one-time division of Epic Games, then Epic Megagames) in 1996, for the PC and Amiga. Rather then a strictly vertical scrolling style, you are able to go anywhere in the level at your own discretion, similarly to Desert Strike but lacking Isometric Projection.

It's the far-off future year of 1998, following a nuclear World War III. You are are one of the last Vehicular Combat Troopers of the North American Armed Forces, on a mission to destroy various bases belonging to an unnamed, but very well-equipped South American faction. Whilst in their base killing their dudes, you sometimes must also rescue your dudes who the enemy has taken hostage, drop off and pick up a saboteur, and other objectives. You are usually tasked with destroying a specific target, but there's nothing stopping you from wiping the entire base off the map.

You have the option of using either an Apache attack helicopter or an unidentified (but awesome) battle tank, each with distinct weaponry. The Apache has six weapon bays and the tank four, as well as a separate "special" weapon bay, of which there are three unique ones for either vehicle. These bays can be reconfigured before each mission to hold different amounts of ammunition for each weapon, though the first bay always has the chain gun. You could have a whole bunch of ammo for one weapon or limited ammo but lots of different weapons, or any combination thereof. You can also tweak the specs of your craft, tipping it towards Mighty Glacier or Fragile Speedster as per your play style.

The game is divided up into five chapters called "Operations", each consisting of four to five levels, with different objectives and increasingly difficult enemies as you go along. Though the game lacks Bosses of any kind, you do get large groups of enemies thrown at you constantly in later levels.

This should not be confused with the 2002 PlayStation 2 game by Takara, or the Metallica song.

Seek And Destroy provides examples of: