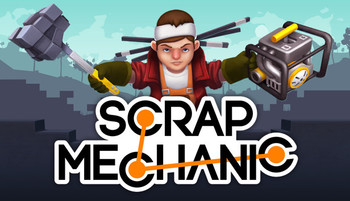 Scrap Mechanic is a Construction-Focused Wide-Open Sandbox game made by a Swedish developer Axolot Games. The game was originally inspired by the devs' work on a test Xbox 360 port of Minecraft. Its main selling point is the ability to create moving machines of byzantine complexity, with any kind of shape and size you want, and potentially endowed with massive transformation capabilities. The game was originally announced on the 4th of November, 2014, and was released into Steam Early Access a little over a year later, on January 20th, 2016. Four years later, after a protracted development process, the Survival Mode was added to the game, with a load of new content and gameplay mechanics.
Advertisement:

The game's Creative Mode features around four hundred different parts and grid-based "base materials" that can be stretched to any size and shape, bearings that can be used to build cars and transforming mechanisms, engines and seats to power and control vehicles, rocket thrusters for flying vehicles, controllers to program elaborate transformations, pistons to move things linearly, and a few other useful things. The Survival Mode, meanwhile, offers a noticeably different gameplay experience - with enemies, weapons, and consumables (such as food and gasoline for cars), an item crafting mechanic, vast procedurally-generated maps, a day and night cycle, bodies of water, NPC characters to trade with, warehouses to raid for rare supplies, and other interesting things. The official page for the game is here

Not to be confused with Scrappy Mechanic.