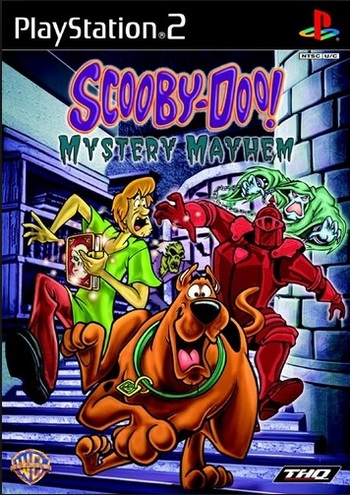 Zoinks! Like, let's get out of here, Scoob!
Scooby-Doo: Mystery Mayhem was a video game based on Scooby-Doo released in 2003 for the Game Boy Advance and in 2004 for the PlayStation 2, Nintendo GameCube and Xbox.
Advertisement:

Both the handheld and console versions of the game have the story of Mystery, Inc. investigating a standard case at Hambridge University before discovering that a mysterious organization is using an enchanted book called the Tome of Doom to unleash real ghosts and other supernatural creatures upon the world. It is up to the gang to use the Tome of Doom to recapture all the monsters and ghosts and solve the mystery of who's doing this.