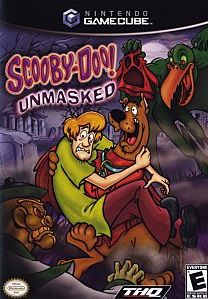 Scooby-Doo! Unmasked is a 2005 Platform Game based on the Scooby-Doo franchise. It was developed by Behaviour Interactive (then known as Artificial Mind and Movement) and published by THQ.

One day, Fred takes the Mystery Inc. members to a special effects company called Monstrous Fright and Magic to introduce them to his cousin Jed, who works there. But when they get there, they discover that Jed is missing, so, after talking to the manager, Winslow Stanton, and his partner Marcy, they go to various places that use MFM-branded special effects to look for clues regarding Jed's whereabouts and solve the mystery of the malfunctioning animatronics.

The game was released the PlayStation 2, Nintendo GameCube, Xbox and Game Boy Advance on September 12, 2005, and was also later released for the Nintendo DS on September October 18, 2005.