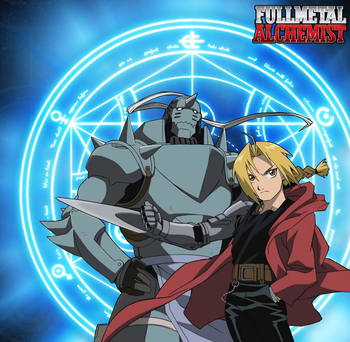 Fullmetal Alchemist tells the tale of two brothers, Edward Elric and Alphonse Elric, who attempt to resurrect their dead mother in an alchemical ritual. However, to their horror, the ritual goes horribly wrong, crippling both their bodies. Edward loses both his arm and leg, while Alphonse loses his entire body and has his soul attached to a suit of armor. Thus, they set off in search of the Philosopher's Stone, an artifact they believe will help them regain their bodies.

The series began as a manga written by Hiromu Arakawa which ran from 2001 to 2010, with many adaptations and spin-off material following. It was widely acclaimed in Japan and its success also reached overseas. Enough to name a trope or two.

If you see a link to this page that only applies to one of these works, please direct it to the series it belongs to. If you're referring to characters or events that cross both versions, please link to the manga's page, since it's the source material for both.