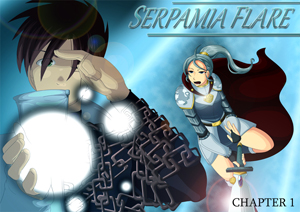 is a fantasy webcomic created by rufiangel. The comic starts with the coincidental meeting between Kylie, a cool knight, and Cain, a hapless cleric. They strike up a partnership to get through a monster-filled cave together, and the story follows their journeys from there. Early character concepts and the first half or so of Chapter One was published onto DeviantArt in 2003, but the strip went into hiatus several years later. It was picked up again in 2013 with a regular update schedule and has continued well past Chapter One since.