Recap / Asterix and the Chieftain's Daughter 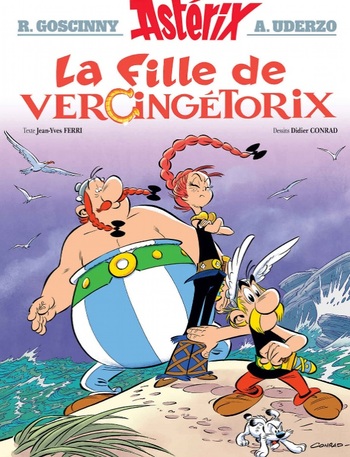 La Fille de Vercingétorix note "The Daughter of Vercingetorix" is the 38th album of Asterix, released in 2019, and the fourth album made by Jean-Yves Ferri and Didier Conrad since they took over the series.

One night, the Gaulish village is visited by two Averni chieftains, Monolithix and Sidekix, who were lieutenants to Vercingetorix up to the fateful battle of Alesia and thus good acquaintances of Vitalstatistix. To everyone's surprise, they have a young girl in their company who is revealed to be Adrenalin, Vercingetorix's daughter. She and her companions were sent away just before the final battle in order to carry on the fight against the Romans, with Vercingetorix's torc to identify her as his successor as a symbol of resistance. However, Julius Caesar has learned of her existence and wishes to have her taken captive and re-educated to the Roman ways; as a result, the Romans are hunting her, led by a Gaulish traitor named Binjwatchflix, a former scout for Vercingetorix who felt unappreciated by his leader and now serves the Romans. Consequently, the two chieftains took Adrenalin to the village, the only place avoided by the Romans, to keep her safe until they can relocate her to Britain, where the Romans will not expect to find her.

Vitalstatistix agrees to safeguard the girl, telling only Asterix, Obelix, Getafix, Impedimenta and Geriatrix about her origins, although the latter two swiftly make the whole village know. Asterix and Obelix are assigned as her bodyguards; but Adrenalin, in her teenage years, is rebellious and self-reliant, and quickly becomes weary of the ways of the village's adults while at the same time making friends with the younger generation, particularly Selfipix and Blinix, the eldest sons of Fulliautomatix and Unhygienix respectively. Soon, she decides to run away from her role as a figurehead of war, and her new friends help her sneak out of the village.

However, Binjwatchflix has managed to track down Adrenalin and puts the surrounding Roman garrisons on alert. During the chaotic search between the Gauls, the Romans and Binjwatchflix for her, Adrenalin comes across two of the Pirates collecting fresh water and, to Redbeard's consternation, commandeers their ship in order to sail to Thule and live her own life in peace. However, Asterix and Obelix spot the pirate ship sailing away and take up pursuit, along with Selfipix, Blinix and Dogmatix; and additionally, Binjwatchflix has stowed away on the ship. In a rapid sequence of events, the Gauls and Pirates are forced to contend with Adrenalin's stubborness and a Roman galley attacking them, and amidst the fighting Binjwatchflix grabs the girl and the torc and entrenches himself in the pirate ship's lookout post. Obelix simply rips out the mast, causing the ship to sink and dropping Binjwatchflix and Adrenalin into the water. As he tries to get into the boat the Gauls have come in, Binjwatchflix drops the torc, which sinks to the bottom of the sea. Determined not to be thwarted, Binjwatchflix jumps overboard to swim to shore, but is unknowingly followed by a shark, leaving his fate in doubt.

Once safely back in the village, Adrenalin openly defies Monolithix and Sidekix, wishing to be no part of their rebellion. However, the Averni soon find that one of their warriors is wearing Vercingetorix's ceremonial helmet and so make him the new figurehead of their resistance. After giving her blessing to Asterix's village as Vercingetorix's true successors, Adrenalin departs for Thule, but eventually ends up at another, multi-ethnically inhabited island. The Gauls and their Averni guests end the story with their traditional feast.