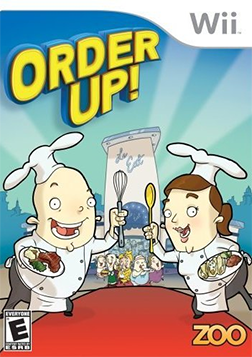 Order Up! (spelled Order Up!! in later releases) is a cooking video game developed by SuperVillain Studios. It was originally released in 2008 for Wiiware, then subsequently released for Playstation Network, the 3DS eShop, and iOS. Your character is a silent, nameless chef who drops out of a plane onto the island of Port Abello. He or she quickly finds employment at a fast food joint, but is understandably disappointed with his or her paycheck and quits, soon purchasing a broken-down diner for his or herself. As the game progresses, more restaurants are purchased and improved, ultimately leading up to the prestigious Fortified Chef competition.

Order Up! contains examples of: