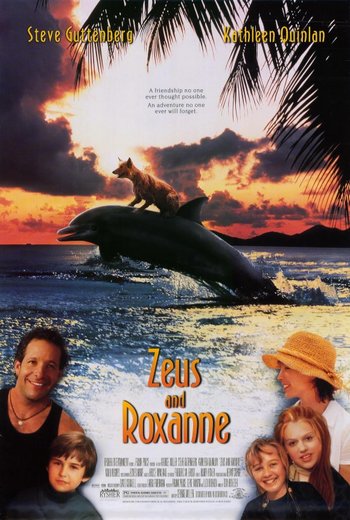 "If a dog and a dolphin can get along, why can't our mom and his dad?"
Advertisement:

A 1997 family movie about the Interspecies Romance between a dog named Zeus and a dolphin named Roxanne. Zeus belongs to Terry (Steve Guttenberg) and his son Jordan, who are on an extended vacation on... some Caribbean-esque island. Roxanne is the research subject of a Marine biologist named Mary Beth (Kathleen Quinlan), who is the mother of two daughters, Judith and Nora, and just happens to be the next door neighbor of Zeus's family. Hilarity Ensues as the Terry and Mary Beth become romantically involved and Zeus and Roxanne pursue their own love.

Meanwhile a rival scientist named Carver (Arnold Vosloo) has his sights on Mary Beth's grant and devises various schemes to cash in on the relationship that the interspecies lovers hold, which culminates in his kidnapping Zeus, Mary Beth becoming trapped in a mini-sub, and the rescue of all parties.