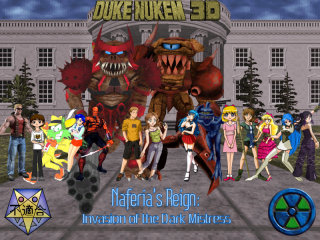 Holy hell, those aliens are huge!
"No hero or villain, no matter how cool, powerful, talented, skilled or charasmatic can do everything all by themself. Even they eventually hit their limits, whether it be the limit of their patience or the limit of their skill, power and talent..."
Advertisement:

is a Game Mod for Duke Nukem 3D, made by Jack Walker, also known as Lord Misfit here and elsewhere.. The modification is a sort of in-progress mega-enhancement to the Duke Nukem 3D game, which is also intended to have a storyline of immense proportions (at least according to the creator's words).

The modification's greatest boasts thus far is likely the inclusions of tons of RPG Elements in a First-Person Shooter of the BUILD-engine era. Leveling your characters, multiple types of stats can increase with level-ups (HP, Armor Points, Energy Points, Attack, Defense, Speed, jumping strength, # of jumps, Underwater Breathing Time, Grappling time, etc.). Further more, instead of just playing as Duke Nukem himself, the player can also find or attain up to fourteen more characters, all of whom have their own abilities and skills (but not yet weapons, due to staffing limitations for the author right now). Even more RPG-like with the many characters is that unlike most class-based FPS games, you can switch back and forth between the characters you've found, as if they're in a full-blown RPG-style party, instead of using only one character from start to finish.

The (assumed) storyline of the game is not widely known all too well by the public, but the assumption is that the name of "Naferia" in the title is also likely the titular "Dark Mistress" and the main villainess, whom all the player characters have to eventually find and stop before she can do something to threaten the world. Yeah, as we said, not much is known of the plot yet, although there is apparently a large document on the creator's computer which has a lot of the spoilers and information about said story, but it's pretty obvious that if he were to release it, the game would be heavily spoiled already. It's also assumed the aliens from Duke Nukem 3D are still the main race of baddies, since the mod is for that game.

Naferia's Reign is a Crossover of many mediums, including (of course) Duke Nukem, but also Shadow Warrior (1997), a lesser known game also made by the same creators as Duke Nukem 3D, whose main character is also a playable character in this mod. Additionally combined is the Bubsy series, with the title character also being a main character as well. Another series included is the Sailor Moon series, with two of the Inner Sailor Senshi (Ami and Minako respectively) being playable characters as well. Another included series is the EarthBound series (with Paula from the second game being the player character that appears in the mod, and with the ATM account of Ness appearing as an easter egg). The final element includes some examples of Real Life, as the character of Jack is actually based off a 13-year old counterpart of the creator, Jack has no Gary Stu qualities and is more of a Side Kick at times to certain characters, despite also being a playable character himself.

Two or three more of the characters are actually Expies of some of the types of aliens seen in the original Duke Nukem 3D, such as ESSence [a Battlelord (the first boss) Expy] and Cybanis [a Cycloid-Emperor (the third boss) Expy], while Nethra is an Expy of the Protector Drones from the expansion pack of Duke Nukem 3D (when she's in that form, and not her human alter-ego Christina Mitchell). And finally toping out the characters are Ted, Lisa, Lori, the "Mysterious Lady", and Maken, all of whom are not taken from a game or series of their own.

The current version is located at github

This mod features the following tropes: