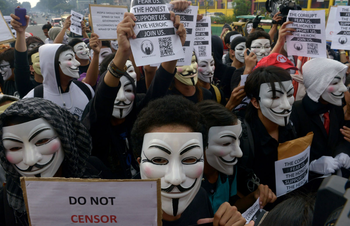 But sometimes it becomes something more. It becomes a symbol, an icon, an emblem... a mascot. This is about characters that weren't conceived originally as mascot for a movement of any type (social, musical, political, etc.) but were chosen by their fans or followers as one, being part of many fanarts, music videos and even cosplays.

Sub-Trope of Mascot (which is this but for Product Placement), Kitchen Sink Drama and Audience Reactions. Usually overlaps with Germans Love David Hasselhoff, being the character targeted as mascot from a different country. Not to be confused with Gushing About Characters You Like where a few people call it a mascot instead of a bigger group. See also Icon of Rebellion and The Voice of a Generation.