He always was a kidder.

An amnesiac young man who finds himself thrust into the bizarre situation of needing to gain entry into the town's lodge before the big blood drive. Unfortunately, the means of gaining membership are not at all reasonable. Or morally sound for that matter.

Possibly the only other half-sane person in the entire town. She and Steve become pretty close over the course of the game. Which makes the ending even sadder.

Steve's mom. Spends most of the game baking huge batches of cookies for the upcoming bake sale, and then throwing them away because it's too far away and they'll go bad.

Steve's dad. Has apparently been sick for a week in his room (which Steve can't get into).

Steve's younger brother. He spends most of his time glued to the TV watching Range Ryder's Cowboy Roundup, an ultraviolent western kid's show.

A slightly unhinged WWII veteran who lost his legs and lower body. He's in charge of a military operation in Harvest.

The principal of Gein Memorial School. He takes pride in preparing the younger generations for the world, but there's something noticeably wrong in how he conducts himself...

The most notable teacher at Gein Memorial. She doesn't buy into that 'corporal punishment' nonsense... "Spare the rod, spoil the child." A rod's too thin. But a baseball bat...

A sheriff whose badge seems to just be for show. He rarely fights crime, and instead seems to berate his subordinate Loomis.

Doesn't seem too popular with anybody in Harvest. Think of him as the Barney Fife to Dwayne's Andy Griffith.

A rather lazy man who claims to be Stephanie's father. His biggest driving force in life is to join the Lodge so he can have access to all the meat he can eat.

Harvest's go-to mortician. He also runs a hotel for transients. Strangely, all the transients who wander into Harvest turn up dead long after...

An old gentleman who has an obvious crush on Edna, although calling it a crush is much too innocent.

AKA The Wasp Woman. A very strange old woman who lives in a run-down house full of wasp nests.

Owner of Edna's Diner (not "DNA's Diner" as everyone likes to call it,) who raises her daughter Karin by herself.

The 8-year old daughter of Edna.

Harvest's resident paperboy. Since the Sentinel burnt down, he's decided to keep the business going by collecting people's papers instead, and making damn sure to let them know that they better have a newspaper for him every morning or something... unfortunate might happen.

A trio of extremely flaming firemen, who spend much of their time painting naked pictures of the same male model in provocative poses over and over.

The host of Range Ryder's Cowboy Roundup, a very violent kid's show that just seems to consist of him killing Indigenous people in violent and gory ways.

The woman who runs the general store.

The owner of the barbershop.

Former aluminum siding salesman. Since the bottom dropped out on the aluminum market in Harvest, he's since switched to being the town plumber.

A farmer who hangs out with Pete. Apparently hunts aliens in his spare time.

A worker at the Mason's Meat Plant.

The face of The Lodge, who gives Steve his daily tasks in order to become a member.

The true villains of Harvester, who designed Harvest as a VR simulation for making serial killers.

The Children (Mystery of Motherly Love) 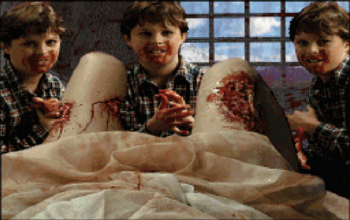