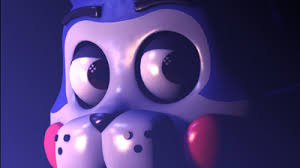 Everything's dandy when you're with Candy!
"No company is without a rival.
Freddy Fazbear's New Pizzeria has closed for good. And so, another restaurant is going to take its place in the world of entertainment.
What could go wrong?"
— Gamejolt description
Advertisement:

Welcome to your new job at Candy's Burger and Fries! ...wait, what? No, we don't have any relation to Freddy Fazbear's Pizza; in fact, they just closed down recently. No one knows why, probably tax reasons... whatever, their pizza wasn't even that good. Anyway, let's focus on your job. You're the new night guard here (the old one was fired for... reasons), and it's your job to protect the building. Now, if you feel threatened, you can lock the room down; both of the doorways and the window in front of you have solid steel doors that can be shut at a moment's notice. You can also check the cameras with your monitor, and if you want a total view, you can turn on Night Vision mode. Keep in mind that all of this draws away power from the central battery, and once you use that up, it's gone. But don't worry—nothing is going to come in there.

Oh, the animatronics? Yeah, we sunk quite a pretty penny into those. Truth be told, they've been acting... strange. They might wander around at night. But don't worry, it's not like they're actually gunning for you or anything.

leaves you wanting more, you can find the game on Gamejolt

On August 21st, 2020, Scott Cawthon, creator of the Five Nights at Freddy's series, announced that Macko had been invited to join the Fazbear Fanverse Initiative project, in which certain FNaF fangame creators were given official permission to sell products and merchandise related to their series. Macko was given funding to continue working on the fourth game in the series, which was first confirmed on September 1st, 2018.