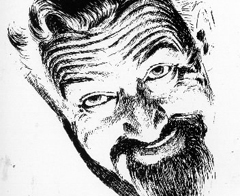 Ernest Earle Anderson (November 12, 1923 – February 6, 1997) was an American actor and television announcer who was best known as the "Voice of ABC" as well as playing the character Ghoulardi in the horror series Shock Theater. He was one of the first horror movie hosts in the country.

Born in Boston, Massachusetts, Anderson served as a naval officer during World War II before he became a disc jockey at WSKI in Montpelier, Vermont. By 1958, he moved to Cleveland to become a disk jockey at WHK. He was dismissed from the network after it switched to a Top 40 format. He worked at NBC television station KYW-TV (later WKYC) as a host of the short lived morning movie show Ernie's Place. After that he moved to WJW, where he collaborated on comedy sketches with another local comic, Tim Conway, and began hosting horror movies as Ghoulardi.

Anderson's character was a hipster, unlike the horror character prototype. Ghoulardi's costume was a long lab coat covered with "slogan" buttons, horn-rimmed sunglasses with a missing lens, a fake Van Dyke beard and moustache, and various messy, awkwardly-perched fright wigs.

Unlike most movie hosts of the day, he would openly mock the B-movies he hosted. "This movie is so bad, you should just go to bed." During chase scenes, he would insert footage of himself running away or model cars being exploded.

He openly mocked the residents of Parma

, a suburban working class bedroom community that was heavily populated by Eastern European immigrants and their descendants. He ridiculed Parma residents for their taste in music (polka) and their "white socks" sensibility.

("Dorothy, Baby!"), whom Anderson said actually didn't mind at all - "she knew what I was doing".

By 1966 Anderson felt like he'd gone as far as he could with Ghoulardi and Cleveland TV, and, with his former comedy partner Tim Conway enjoying success in Hollywood, Anderson relocated to Los Angeles. A few months later, Shock Theater ended and the Ghoulardi name was retired. While he got some small on-camera parts as an actor, and briefly revived his comedy partnership with Conway, Anderson really made a name for himself as a voiceover announcer. His big break came when he was hired as the announcer for The Carol Burnett Show in 1974. Not long after, ABC hired him as its main imaging voice, a job he held for nearly two decades, voicing the network's promos and doing announcements for shows like shows like Roots (1977), Break the Bank (1976) (replacing Johnny Jacobs for the final week or so of the ABC run and continuing into the syndicated run), "The Loooooove Boat", and both America's Funniest Home Videos and America's Funniest People. He also did voiceovers for other assorted projects, including early commercials for the Sega Master System.

Anderson died of cancer on February 6, 1997. One of his last voice-over roles was as narrator for the pilot episodes of The Powerpuff Girls.

He was married three times and had nine children, including noted film director Paul Thomas Anderson.

Ernie Anderson and his works provide examples of: