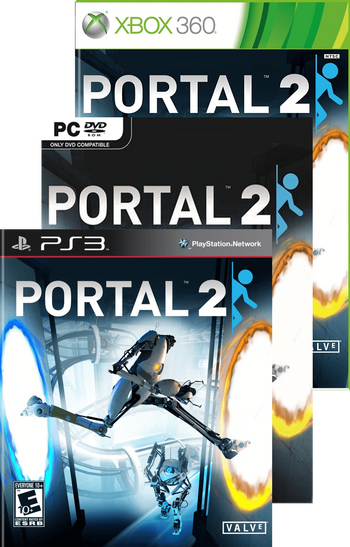 It's like it leaped to several systems.
"Coming this summer — on every platform ever made."
— Trailer

of The Simpsons Game
Advertisement:

Functionally, multi-platform games differ from ports in that the game was written with the other systems in mind even during initial development.

The time and effort to make a multi-platform game is not as great as some assume. Some developers have stated that it raises the cost only about 10 percent. This can vary quite a bit depending on how differences between platforms in question are. For instance, the Xbox and PC versions of Prince of Persia: The Sands of Time are quite similar; the iPhone and PS3 versions of The Force Unleashed are quite a bit different.

While multi-platform games were not uncommon during the 16-bit and 32-bit console generations, particularly among western developers, they started becoming more prevalent during the sixth console generation. Even though the PlayStation 2 was the biggest selling console of this era, games on the Xbox and GameCube still sold well enough to ensure an even bigger profit than on the PS2 alone for very little extra development. The fact that the Xbox was a functionally small PC running an embedded version of Windows didn't hurt either.

By the seventh generation multi-platform development became the norm for most third-party developers due to the ever increasing budgets in mainstream games as a result of the standardization of HD displays. Series that used to be at least timed exclusives were now multi-platform from launch, and with the Xbox brand now selling just as well internationally as the PlayStation brand this time around, even Japanese developers began making games for both the Xbox 360 and PlayStation 3. Console versions of games would continue to become more and more like their PC counterparts than ever in the eighth generation. The PlayStation 4 and Xbox One not only adopting the X86-64 architecture used by current PCs, leading to less disparities between the platforms and the rise of games that were "console" exclusive but still had PC version. This generation also saw the introduction of the high-performance PS4 Pro and the Xbox One X models in the second half, meaning that console developers now found themselves allowing the lead of their PC counterparts in scaling their games to fit wider arrays of hardware specifications. Microsoft would continue with the idea of offering different levels of gaming hardware in the ninth generation, with the Xbox Series X|S being low- and high-performance models from the start, while the PlayStation 5 is currently Sony's sole gaming platform.

On the note of Nintendo, ever since the underwhelming sales of the Nintendo GameCube, the company has tended to sacrifice hardware power in favour of unique hardware features to differentiate itself, meaning that multiplatform games for their systems often lack parity with same generation Xbox or PlayStation versions. If they receive ports at all, that is. The motion control-focused Wii still managed to receive multiplats despite being essentially a GameCube with an overclocked CPU and no HD output thanks to its popularity and low development costs, but these tended to either be unique versions and/or shared with the PS2 (which itself would continue to receive games until the end of the 2000s). The tablet-focused Wii U was essentially an overclocked Wii, but didn't have any of that console's benefits (especially not popularity) and so quickly found itself without any multiplatform titles. Their current system, the "hybrid" Nintendo Switch, uses a mobile chipset for the sake of portability, once again putting them behind graphically, but its popularity and ease of development means that it manages to grab a fair number of multiplats (and unlike the Wii, none of them are reformulated games).

On the PC side of things, some games are literally multi-platform, with the versions for different platforms (say, Windows, Macintosh, and Linux) all on the same physical media (sometimes called a "hybrid" release.) This is Older Than the NES in PC-land; in the days of 5.25" floppy disks, some games were released with a version for one computer (for example, the Commodore 64) on one side, and a version for another (Apple ][, IBM PC, or Atari 8-bit) on the other. Obviously, this sort of thing doesn't fly in console-land, due to dictatorial fiat console companies have over developers (possibly carried over from the days of carts, when it was physically impossible.)

Keep in mind the difference between this and a port. If a game was made for one system first, any version past that is a port or remake, like Tetris.

It also doesn't count if the series has many different versions on each system, like DanceDanceRevolution or the Tales Series.

Compare Cash Cow Franchise. Related to Reformulated Game, when a game is completely remade from the ground up when being released on another platform due to hardware differences.

Releases among series that usually or previously develop for one system:

Titles or series notable for being multi-platform: