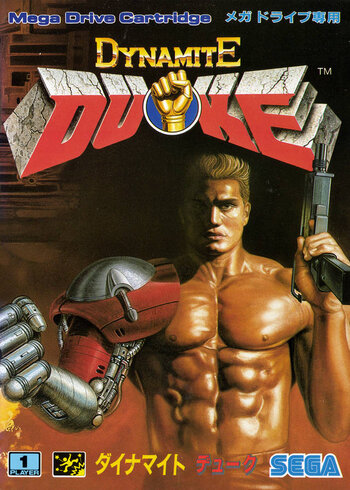 How 90s do you want to cover to be?
Advertisement:

Dynamite Duke is a 1989 arcade Run-and-Gun action game made by Seibu Kaihatsu (of Raiden fame) and SEGA, with a gameplay format lifted from Cabal. Players assume the titular character who goes around kicking ass from a behind-the-back perspective across 9 stages (6 in the Sega Genesis port) as they attempt to stop a rebel army from unleashing mutant abominations across the world.

Not to be confused with Dynamite Dux, another SEGA game.

The Duke is ready for action:

Congratulations.
You have saved the world.
Your bravery and Courage are
to be commended.

Your video game skills are
that of an expert player

We bet you can't do it again!!