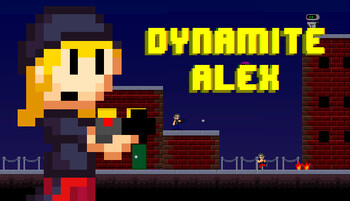 Dynamite Alex is a 2014 PC/Android game created by game developer Ryan Silberman about the adventures of the titular heroine, Alex Tobynskii.

The gameplay is intended as a throwback to retro video games, especially series.

The android port was built by Zachary "Crazy-River-Otter" Wiebe and NOVA, two friends of the series creator.